When Tailee See decided to set up her own food industry company, she struggled with deciding where to start. From the MYLLY program for starting entrepreneurs, Tailee found the answers to her questions, which took a lot of stress over her shoulder.

When Tailee See started to create a business idea for her company last spring, she noticed soon it was not that easy.

“At first, it was a mess. I really didn’t know where to start, as there were so many important things I needed to take into a consideration.  At that time, I felt as if I was standing in front of several crossing roads, all of which would lead me to the same destination. However, I didn´t know which road I should take first and what the next steps should be, so that I would not have to waste time with wrong turns”, Tailee tells.

At this point, the idea of a start-up company focusing on street food, had been on her mind already for three years. 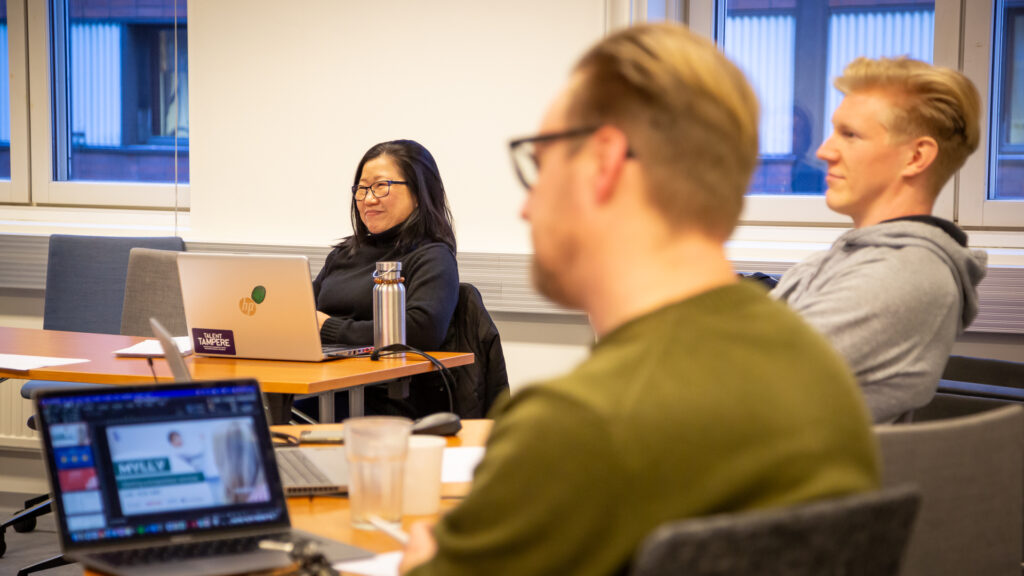 ”Usually when somebody mentions street food, most of us may think of hot dogs, pizzas or kebabs. However, what I mean by street food, is the food made in my hometown, Penang, the food capital of Malaysia.”

Tailee left her job in marketing and communications to build herself a new career from her beloved hobby. Testing new recipes and developing new dishes consumes a lot of Tailee’s time. Tailee’s grandmother, who worked in Malaysia as a food entrepreneur in the 70s, has always acted as an inspiration on Tailee´s culinary journey. Now she about to follow her grandmother’s footsteps.

The business plan took a giant leap forward in the autumn of 2021, when Tailee received a tip from Tampere University of Applied Sciences’ student counselor regarding MYLLY coaching, where those who are interested in entrepreneurship, can develop their own business idea. Tailee signed up immediately.

Forming a close community in MYLLY

MYLLY coaching program is meant for individuals and teams, who have a business, product, or service idea, but do not have a company or business yet. MYLLY is a free program, where participants can develop their own business idea together with peers and coaches. The program is organized by the City of Tampere, Ensimetri, Demola, Tribe Tampere and Pirkanmaan Yrityskummit.

The first MYLLY was held last fall. Jarmo Tuominiemi and Tommi Järvinen from Demola serve as the coaches. According to Jarmo Tuominiemi, usually just being heard and having the additional acknowledgement for one´s idea, helps an aspiring entrepreneur move forward. Meeting other entrepreneurs, who are all in the same situation, is also important.

“In MYLLY we gather weekly for a forum, where participants can share their experiences and talk about the past week’s events. This creates a close-knit community. The participants in the first coaching planned on being in touch and meeting with each other even after the program ended”, says Jarmo.

In addition to the weekly meetings, the program includes three two-day bootcamps. Bootcamps consist of lectures and concrete assignments for business development. In total, the program lasts for approximately two months.

“We try to give participants the most comprehensive picture possible of entrepreneurship. We focus on what it is like to develop a growth company or startup today. Participants learn how successful companies usually tackle
the problems of growth and development”, says Tommi Järvinen, another of the coaches.

Brainstorming with others takes you forward

Five active companies left to brace the world after the first MYLLY program – Tailee’s company among them. Tailee feels that MYLLY has been a very practical program that suits well for foreigners as the coaching is mainly held in English. However, even if English isn´t your strong suit, you can still participate in the program.

”MYLLY helped to clear-up the various crossing paths in front of me. The coaches provided guidance and enlightenment, helping me to choose which path to work on and in what order. This has taken a lot of stress from my shoulders and I can finally also work with other matters”, Tailee tells.

Tailee says the coaching taught her to be open-minded and to share her ideas with others. Although the program includes people from different backgrounds and everyone has their own business idea, the problems and challenges the participants faced, were all similar.

Now that MYLLY has concluded, Tailee continues her entrepreneurial journey, aiming to bring Malaysian street food to the Tampere market.

“I do hope that we get a chance to have a follow-up meeting with our coaches, so that they know how successful their members are after the MYLLY program”, Tailee says.

The next MYLLY training starts on 10.3. Apply to the program by 25.2. on the Tribe’s page. There will also be a remote information session for those interested in the training on 17 February.

This site uses functional cookies and external scripts to improve your experience.

NOTE: These settings will only apply to the browser and device you are currently using.

Let us know you were here